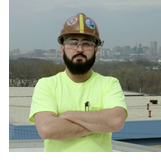 Rico Albacarys didn’t sulk or stew when he was turned down for a Baltimore Local 24 apprenticeship back in 2010. Instead, he got back to work – and the right people noticed. Albacarys, who was unemployed at the time after following the closure of the printing facility he worked for, decided not to attend college. Instead, he worked nonunion construction near his home northeast of the city. A year later, he got a call from Local 24 officials asking him to re-interview for the apprenticeship when they noticed he had met their standard of working at least 450 hours in construction.

“When someone goes out and gets some more experience, we’ll bring them back in for another interview because it shows they’ve taken an interest in the industry,” said Local 24 training director Neil Wilford, who was the local’s training coordinator at the time. “He’s out there working. We don’t want him working against us. Let’s give him a chance to work with us.”

This time, Albacarys was accepted. “Working as an IBEW member was the first time I had a career and not just a job,” said Albacarys, who topped out as a journeyman inside wireman in 2015 and has seen his salary more than double. “I would have had to keep working if I had gone to [college], and if you’re working full time, who knows how long it would take to get a degree. And then, who knows about debt.”