Joseph Sanchez is a husband and a father of two. Four years ago, Joseph made the decision to apply to the International Union of Operating Engineers Local 99 Joint Apprenticeship Committee (JATC) to be a Stationary Engineer. This decision was difficult to make for several reasons which included having just had his first daughter born two weeks previously. Adding to that difficulty was the fact that Joseph was choosing to enter a Registered Apprenticeship program with a resume that is not typical of your average starting apprentice. Having previously graduated college with a Mechanical Engineering Degree Joseph found himself working in an office environment as a consultant to the industry. This experience frustrated him as he realized he did not have the hands on skill sets required of a true engineer nor had college provided him with the real world education needed to truly excel at his job. 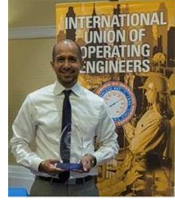 Spending four years in the Registered Apprenticeship Program was not enough for Joey, he needed to excel beyond the minimum standards. Joey set his sights on finishing at the top of his class and this was a goal he achieved. Joey finished as the class valedictorian for the International Union of Operating Engineers Local 99 Joint Apprenticeship Committee Graduating Class of 2017. Speaking to his fellow graduating apprentices, now journeyperson’s, Joey spoke of the high standards set by his instructors as well as the business who hired him, Vornado/Charles E. Smith, and of wanting to continue to grow in this industry. As Joey spoke, and referenced the support of his wife, children and parents, he reminded everyone of the importance of Registered Apprenticeship and the opportunities for successful careers it presents without the associated college debt.

Recently, Joey was the recipient of the AOBA Building Engineer of the Year award. Clearly his hard work and commitment to apprenticeship have garnered positive attention.