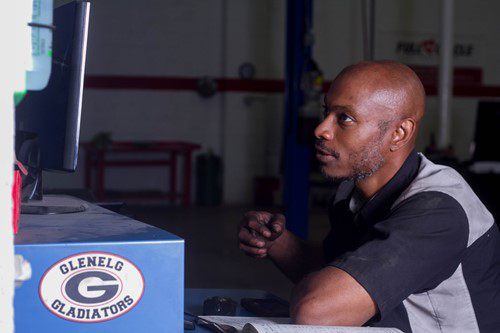 MEET Chris...
Correctional Education – Occupational Skills Training Center graduate – Vehicles for Change
Chris proves that he is a good provider for his family.

Chris is a father, a grandfather and a technician at Heritage MileOne in Bel Air, and he is so happy after a long day of work to go home and be in his own house. This was not always what the now 39-year-old Chris was happy to do. In fact, he says he was always running and often getting involved in things he should not have, which led to him spending 18 of his 39 years in prison.

Chris grew up in a two-parent home. He says he knew he was different because he could always afford the things that his friends wanted. Nonetheless, he always recognized his father’s hard work allowed him to obtain these things. He wanted to be able to do it for himself. According to Chris, his friends often chose to do the wrong things in order to get what they wanted because they felt they had no other option. He admits that he did the wrong things because he chose to.

In February of 2017, Chris became part of the Vehicles for Change Reentry program at Full Circle Service Center (Full Circle). A work release intern, Chris says, “I just got tired…trouble is not hard to get into but it’s hard to get out of.” During his last incarceration of six years, Chris had a real change of heart, “I was always preparing for when I came out,” he said. With Vehicles for Change, Chris knew that when he came home he had a chance.

Chris was a student in Patrick Engram’s class at Occupational Skills Training Center and had such high regard for the instructor. Chris said that Engram would tell his students when they asked a question about a car, “That’s a good question. Let me know when you figure it out.” At first, he admits that it was frustrating, but when Chris took the challenge, he began to figure it out. He credits his instructor for giving him that mindset to be able to take on the challenges he would face when entering into the program at Vehicles for Change, where he would meet his ASE instructor, Wayne Farrar, who said, “That’s what being a technician is – figuring it out.” Farrar often stressed the difference between a technician and a parts replacer.

Chris learned a lot working on the donated cars at Vehicles for Change and the customer cars at Full Circle. He values both his classroom instruction and his hands-on instruction. Even as a graduate, he now dedicates his day off on Mondays to the program. “This is home. This is always going to be home…these are my guys!” he says emphatically. He says it is important to show the interns that the “opportunity is available if you put your work in for it.” Another reason why Chris likes to volunteer on Mondays is that he likes to limit his free time. He feels strongly that he is just one bad decision away from being like many of the other people he has seen falter.

“People helped me,” Chris remarked. He remembers an intern, Anthony, who was on his way out as he was coming into the program. Chris treasures the fact that Anthony always came back to share his success, offer encouraging words and even some technical advice. Now Chris says, “I like my life and this is the easiest it’s ever been.” As a kid, he remembers seeing his father come home from work and sitting down in front of the television and then going to sleep when he was ready. Now he does the same thing and he can connect to his father’s hard work ethic. He is enjoying having the respect of his family as he proves that he, too, is a good provider. 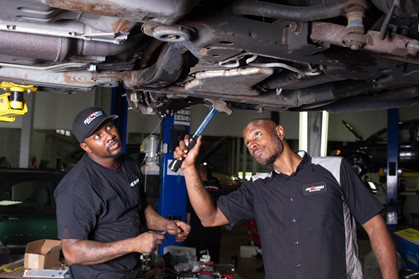